There was a time, and not that long ago, when any decent saloon kept a copy of “The Baseball Encyclopedia” prominently displayed behind the bar. It came in handy to help settle arguments, or at least provide ammunition to one side or the other. These days, of course, a few taps on a smartphone can achieve the same result.

One thing that hasn’t changed is that baseball fans have strong opinions, and they are happy to share them — especially when a view isn’t shared by a person too thick to absorb the wisdom that’s being so freely dispensed.

The starting point for many debates starts with lists that authoritatively claim to identify the best of anything and place them in their proper order. Sports Illustrated was brave enough to take on this task with “Baseball’s Greatest,” a coffee table volume that attempts to not only rate the Top 10 players at each position but goes on to make a case for the best games, managers, ballparks, franchises, sluggers, runners, defenders and more.

If Helen of Troy had the face that launched a thousand ships, this is the book that will launch at least a thousand passionate discussions. 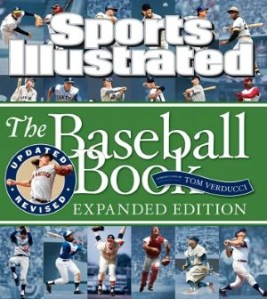 I first began subscribing to Sports Illustrated in late 1971, as a 12-year-old Indiana boy coming into his own awareness of major sports, immersive fan passion and respect for sports journalism. It began with two college covers: “Irresistible Oklahaoma Meets Immovable Nebraska” (football) and North Carolina State’s 7-4 Tom Burleson (hoops preview). I would always think of S.I. from then on as all-sports, and still do.

This came to mind because I am flipping through the oversized pages of SI.’s fabulous The Baseball Book Expanded Edition ($29.95 hardcover) — with 80 pages of updated material to modernize the NYT bestseller of five years ago. It’s funny: After looking through all the photos and essays, what shakes me up the most is the page opposite the Contents, showing 14 S.I. baseball covers through the ages. It puts you in relive mode and I love that.

No matter how old you are, pages will shatter your present-day calm and reshape your mindset with a flood of memories. If you’re in your 50s, it might be a double-truck image of Boog Powell hitting the dirt after a brushback pitch, or a classic intensity pose by Don Drysdale on the mound. If you’re a young-un now, it might be the sight of Derek Jeter performing his jump-throw in a 1999 action shot — knowing he was leading the Bombers to four titles in his first five years. The past always meets the present throughout the book.

My favorite shot is the page 166 double-truck of an exhausted Bob Gibson walking off the mound with an arm around his catcher, Tim McCarver, following Gibson’s complete-game victory over the Yankees in Game 7 of the 1964 World Series. I spent 15 minutes just staring at this image. It is a reminder that nothing really ever changes about baseball, except the people and to some extent the styles.

You expect beautiful and iconic photography from S.I., and the book delivers that in the oversized tradition of the gorgeous “Rare Air” books of the 1990s. You also expect classic writing, and this features essays by such scribes as Frank Deford, George Plimpton, Rick Reilly, Peter Gammons and Richard Hoffer. There are nine new stories, including Tom Verducci’s look at Tim Lincecum and S.L. Price on Ozzie Guillen. The only knock is that it already feels dated now that arguably the greatest finish to a baseball season has been witnessed in 2011, but you can’t have everything and this will keep you busy. It would make a great holiday gift, and look for more ideas from the MLB.com Shop DVDs & Books area. — Mark Newman