Phillies: An Extraordinary Tradition
Reviewed by Ben Platt of MLB.com 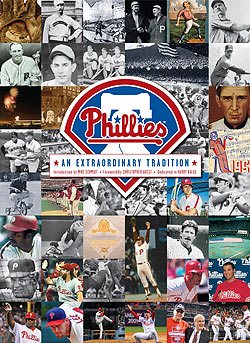 It’s been a great run for Philadelphia Phillies fans for the past few years, with the team making back-to-back appearances in the World Series and winning it all in 2008. Now fans can remember not only the team’s recent success, but they can celebrate the organization’s long history through rare photos, articles and memorabilia with the publication of the new book, “Phillies: An Extraordinary Tradition.” The book is now available in bookstores, Citizens Bank Park and in the Fans section on Phillies.com

“The whole idea was to come up with faces and places in Phillies history and capture it,” said Larry Shenk, the Phillies’ former director of public relations from 1964-2008, who edited the book with Scott Gummer. “I didn’t want the book to be a chronological thing, year-by-year, with wins and losses and all that stuff. I wanted something with pictures in it that people had not seen — I’ve been around a few decades and I hadn’t seen some of these photos before.”

Coming in at 252 pages and with well over 400 photos, the book is true eye candy for people from the City of Brotherly Love as well as baseball fans that appreciate the history of a team that was established in 1883…. Read More | Buy the Book | Autographed Copy